Can't Pay Won't Pay! - Solidarity with the People of Greece!

Responding to a call for international solidarity, the Coalition of
Resistance and the People's Charter brought together a delegation of
trade unionists and campaigners to visit Athens in March 2012. This
film documents their trip. With interviews with striking steel workers,
an anti-austerity MP, a homeless shelter psychologist, an
archaeologist and a hunger striking Mayor, it is a whistle stop trip
around the devastating economic crisis in Greece. It also gives an
inspirational insight into the ways in which people are struggling to
reclaim their lives and serves as a stark warning to all those in Europe who now
face similar threats.
Posted by Unknown at 22:09 1 comment:

Campaigners from Greece and London gathered at Christies today to protest against the sale of looted antiquities and against the cuts faced by the Greek Ministry of Culture. Austerity measures in Greece have undermined public services, the welfare state, and social cohesion. Staff cuts at the Ministry of Culture have led to security being compromised at museums and archaeological sites accross Greece, as a result illegal digging has increased and armed robberies have occurred. 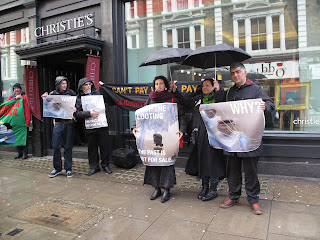 Greek archaeologists, Fotis Georgiadis stated: "There were objects being sold at Christies today that can only have come from the Aegean Islands and the Peleponese in Greece, so they probably are the result of illegal excavations. Antiquities will be stolen as long as there is a market for them, the market is the cause of illegal digging."


Paul Mackney, Vice Chair of Coalition of Resistance and former General Secretary of UCU stated: "It is obscene that the mega-rich are spending large sums of money on Greek artefacts for their private collections, whilst in Athens austerity measures have led to people queuing at soup lines and scavenging for food, and the troika (the IMF, the EU and the European Central Bank) is pressing Greece to sell off its treasures."

London's Burning by Paul Hanes on Sunday, August 14, 2011 at 6:29pm · London is burning. People set it on fire. Shops are being looted and whole streets of residential homes are being raised to the ground. Thousands of the city’s poor and disaffected have kicked off in a spectacular and frightening way. What the London riots lacked in the revolutionary direction of the Arab Spring, it made up for in the violence and chaos of the angry and alienated. The riots were on a large scale, dangerous; untargeted in those they attacked. Truly frightening. Unusually it all kicked off at the same time across London and as police reinforcements were being redirected to London cities from across Britain, its citizens began to trash and burn their streets.

Willy Walsh CEO of British Airways - Service and Safety with A Fuck You!

The British Flag Carrying Airline British Airways in in turmoil Or so we are told. It posted pre tax losses of £401m in the 2008/9 financial year. Through Willy Walsh its chief Executive who oversaw these 'losses' British Airways has now come into conflict with its workforce of Cabin Crew The British Airlines Stewards and Stewardesses Association a division of the Unite Union. In order to adress these losses Willy Walsh in 2009 wrote to Cabin Crew asking them to save the airlne by working for free and to volunteer for unpaid work. At the same time he implemented a drive to reduce British Airways Cabin Crew Workforce of 14,000 by 4000 workers and to reduce Cabin Crew Numbers on each flight to potentialy unsafe levels as the evacuation of an aircraft is one primary function the crew undertake apart from serving refreshments.

A 2.6% paycut followed by a two year payfreeze was also imposed and accepted by the Union. As part of his proposed measures New Staff are to be offered basic contracts of only £11,000 per annum with a £2.40 hour flight bonus when in the air. This is compared with £14,400 at Virgin Atlantic and £20,200 at easyJet. Considering that British Airways operates primarily out of London Heathrow and London Gatwick, the transport hubs for one of the most expensive cities where the London Average wage is £34,762. It is not hard to see that on BA Cabin Crew wages it would be difficult to live in Britain which enjoys an average wage of £24,603. As such British Airways has actively recruited staff from its destination countries and many of its staff have moved away from London to live close to British Airways Destination Airports as the cost of Living In London rises. To do this staff rely on free travel provided by British Airways in ordeer to travel to their working shift starting point in London. BA’s pilots earn an average of £107,600, compared with £89,500 at Virgin and £71,400 at easyJet.

Fuck Off Back to Eton

Fuck Off Back to Eton by Paul Hanes on Sunday, March 6, 2011 at 11:02pm · This Article was submitted to Read Magazine Hamburg March 2011 Since Britain's last election in May 2010, which saw the rise to power of the right in Britain in the form of the Conservative / Liberal Democrat Coalition Government. Under the leadership of David Cameron and Nick Clegg, Britain is beginning to transform in a way which nobody could predict. Since the coalition governments rise to power less than a year ago Britain is seeing fundamental changes in the structure of the society it has known since the end of the first world war. The Welfare State would conjure up images amongst the readership of mainstream news sources of single mothers and of the unemployed by choice. In fact the welfare state is has informed the personality and landscape of Britain in every aspect from safety by ensuring the absence of extreme poverty to ensuring a productive economy through educating the best capable minds as apposed to only those who can afford quality education. By definition the Welfare state is a model in which the state assumes primary responsibility for the welfare of its citizens. This responsibility in theory ought to be comprehensive, because all aspects of welfare are considered and universally applied to citizens as a "right". As such Britons have enjoyed access to a good level of education, health care, suitable standard of housing, access to a minimun standard of subsistence when out of work through good quality public services available to all and targeted at those who need them most. The framework for delivering this was set up at times when the ruling classes conceded to the citizens concessions which were popular to the working classes who had supported the continuation the the ruling classes and industrialists though their service and sacrifice in the Second World War.

by Paul Hanes on Wednesday, October 6, 2010 at 8:02pm · The heralded anti-war song by Bob Dylan 'Masters of War' clearly takes aim at those who profit from war and produce its weapons. In its opening verse it lays out the distaste that Bob Dylan was feeling when he wrote the song in 1963 and represented the anti-war sentiment of many for decades to come.

The song continues its venom towards those who choose to make a living and profit from the destruction and killing which is carried out with their weapons and notably weapons which are not fired in the neighbourhoods in which they, the war profiteers live. Dylan finishes the song with the overtly threatening verse: And I hope that you die, And that your death'll come soon, I will follow your casket, In the pale afternoon, And I'll watch while you're lowered, Down to your deathbed, And I'll stand over your grave, 'Till I'm sure that you're dead. The resonance of the sentiment of Dylan's 'Masters of War' has made it an anti war anthem for the people. It is one of the most covered songs having touched the emotions of many over the almost 50 years since its release.

Dylan clearly is goading the war manufacturers into a confrontation with the opening line. The war machine is a formidable opponent. A complex industrial and capital structure spread out across the world producing weapons. We in the west rarely see the consequences to families who live far away in commonly NATO, USA, UK or Israeli targeted countries. Increasingly we are becoming aware of the atrocities, which our governments commit on our behalf in some poorly constructed excuse (believable to the non-thinking population and my local Member of Parliament Greg Hands) that 'the war on terror is making us safer'.

The Wiki Leaks expose told us what we had known about war all along. The US government's assertion that the leak had put US troops in danger was laughable. I am fairly sure that the average Afghan knew for years that the school bus got shot up and their kids are dead as apposed to travelling 100's of miles to an internet point to discover it on Wiki Leaks. What the war establishment fears most is that their terrible deeds will come to light and the people will put a stop to their war profiteering. Even the most cursory examinations of tactics in Afghanistan shows that the NATO operation which has failed to shut down resistance from one of the poorest nations on the planet (in more time than it took to conduct World War I and World War II put together) shows that an extended war is more about extended profits for companies than any clear mission objectives.